Le’ts draw… some IT related concepts!

One thing I want to be better at, is visualizing the systems or concepts that I want to discuss. I like drawing, but I know a lot of people who don’t, and some who are downright scared of it. And that’s too bad. Even if your drawing skills stopped evolving when you left Kindergarten, there’s still so much to gain from using symbols to explain things. Especially for those visual learners out there.

When drawing and explaining at the same time, it doesn’t have to be pretty. It has to be clear. What’s important is to capture the essence of the thing you’re trying to draw. The essence of a tree isn’t it’s beautiful and detailed leaves. It’s a trunk with two branches. No need to use time on drawing anything else, if people get that what you’ve drawn is a tree.

So let’s jump into it! Over the summer I will post some different IT related concepts and how I would draw them (And how you can as well). They take their starting point in test-related concepts, but anyone involved in IT can benefit from them. There’s already a lot of symbols in our everyday visual langauge. So we’ll start of with some basic concepts

The save button is one example of a concept that has become outdated, but is still used because it’s meaning has preceded its functionality. It’s a floppy disc. I’m from a generation of IT workers who will never use a floppy disc during their work (though I did use them as a child.. so at least I know what they are). Regardless, I know that when that symbol is on my screen, it means that I can save something.

Draw it: Make a square. Then make a small square in the upper part of your first square. If you are fancy, make a circle in the middle. When the e-mail was introduced, nobody knew what it was. So to make it easier for people to get it, someone clever used a letter to symbolize an e-mail. That way, people knew that the e-mail worked in mostly the same way as a letter did. And as the save button, that symbol has stuck with the e-mail ever since.

Draw it: Make a longitudinal square. Make two lines that meet halfway down the square, in the middle. 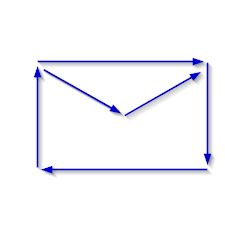 Feel free to submit your own interpretations of the concepts in the comments!